People often suggest that Amsterdam is the ideal setting for your first trip to Europe.  Those people must be high. Which is probably why they love Amsterdam.

I’m not really a fan of big cities. I hate New York. I commuted there to work for nearly two years, and I couldn’t stand the crowds, being groped on the train, the lack of trees, the smell of urine in Grand Central Terminal in sweltering summers, the fear of being pushed on the tracks and the general feeling that I was covered in grime and plague-inducing germs when I arrived home every day.  It’s way too peopley for me.

I’ve written before how I have this dream to go on The Amazing Race.  (Gratuitous link here.) Every season, toward the middle of the race when they are already sleep deprived, the sadistic producers send the teams to either India or China so viewers can watch teams have nervous breakdowns over public transportation, language barriers and crowds.  I always thought the germs and questionable local delicacies there would be my downfall.  Now I know I would be the first contestant to lose the race in Amsterdam.

Fortunately I arranged for a writer friend to meet me at the airport, because surely the shuttle bus experience with a 50 lb. suitcase and rerouted bus routes would have led me to just stay on the bus until it circled back to the airport and I could go back to Iceland.  My friend was not from Amsterdam, but a town in the country, and so she relied on Google maps to get me and my overstuff

ed luggage to my hotel.  Bearing in mind, I was operating on 6 hours of sleep since I left the US three days earlier, and up since 3 am for my flight, I was dragging. We walked, and walked, and walked. And I learned the hard way that wearing my microfiber underwear and baggy boyfriend jeans while walking miles was not a smart move.  Here I was, lost in Amsterdam, wheeling a suitcase that did not like cobblestones, and trying to hide the fact my underwear had slid down and was now functioning as an exercise band around my thighs.  I also learned the hard way that Google maps does not work anywhere in Amsterdam.  (Google does, however, tell you that the guy sitting at the table next to you is not, in fact, a famous Dutch speed skater. Which is fortunate, because you know I get around famous athletes. (Gratuitous link 2.0) I suspect the local Google mapmakers were also high.  Eventually, my friend stopped a bicyclist who told us we were 15 or so blocks out of the way, and had passed our street due to construction blocking it.  We had to get a cab, which is ridiculously expensive, since every street is one way and conveniently under construction. And the cab drivers are also probably high and forget where they are going.

Amsterdam is famous for its bicycles.  That doesn’t adequately prepare you for the kamikaze level bike riding that goes on.  It’s bad enough there are bike lanes and tram lanes and bus lanes and crosswalks and cars all crossing at the same time.  But if you don’t ring your damn bicycle bell, then go ahead and hit me, motherfucker.  I don’t care what your laws say, I do personal injury law and I will see your ass in The Hague.  I’m proud to say I survived 6 close calls with bicycles and one with a Vespa.  But I did see one tourist get nailed at about 25 mph by a bicycle.  She slammed her head on the street and was bleeding, but the bicyclist just picked up his bike, called her some choice Dutch words (or cleared his throat, hard to tell) and drove off before the police and ambulance arrived.

My first morning there I wandered into a corner bakery on my way to the Anne Frank House.  I ordered a giant Belgian waffle (which was strange since I had been in Belgium and didn’t really see waffles) slathered in pink glaze.  To my surprise a pink glazed waffle the size of my head cost $87 less than a Dunkin Donuts pink glazed donut in Iceland.  I sat down at the counter to people watch out the floor to ceiling window and pretend to be European.  Instead, I was a horrified American, as I watched pigeons trolling for snacks and noticed most of them had mutated feet. Either they had been run over, or Amsterdam uses metric tons of Round-up that washes into the canals.  Instead of feeling like a hipster European, I obsessed over rescuing these poor creatures. I bought a croissant for one with a severe limp.  After seeing several nearly get run over, I had to escape.  As if the Anne Frank House would lift my spirits. 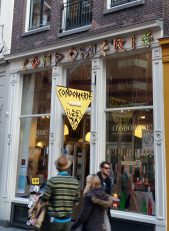 ed by all the men smoking pot at 8:00 in the morning.  Maybe the mutant pigeons upset them too.  If you really need to do that first thing when you wake up just to make it through the day, IN AMSTERDAM, maybe you need to see a therapist for some life-coping skills.  It’s not like I spike my orange juice EVERY day.  I’ve never smoked pot in my life. I’ve always been more of an aspiring alcoholic. I don’t care what other people do. But damn, it’s annoying when you’re constantly in a haze of it walking down the street. You would think that might have improved my mood, but my OCD was in overdrive that I kept getting lost. And people shouldn’t be allowed to smoke and operate a death machine with a decorative bell. 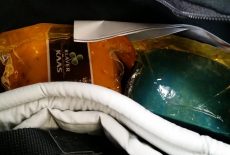 oulder like the running of the bulls. There was no escape, you just had to follow where the crowd was going. It could have ended horribly, like that video of the lemmings that plunge to their death off a cliff, only with a canal. I tried to look around, which was a bad idea, as I slammed right into a metal pole designed to prevent vehicle traffic, right in my crotch, and created a traffic jam behind me. Everyone around me laughed, which added to my list of grievances with the city that I plan to announce at Festivus, but I was more concerned that the two pounds of cheese I bought earlier at the Amsterdam Cheese Museum would not be coming back to America.  Fortunately, my blue lavender cheese was intact. My claustrophobia was not.

At least I can say I was there. And my vagina saw some action in the Red Light District. And I didn’t drown in a canal. I guess that’s a win.

This may or may not be an actual image of this site's author. But it probably is, because if I were to use a fake photo I'd pick someone thinner and younger, or Michelle Obama.